I visited the Council’s “public drop-in event” for the Lewisham “Healthy Neighbourhoods” scheme yesterday. It was so crowded that it was difficult to get a useful conversation with any council staff (I will be sending them some written questions instead), but I did talk to a few of the other attendees who were all opposed to the road closures and the lack of proper consultation. 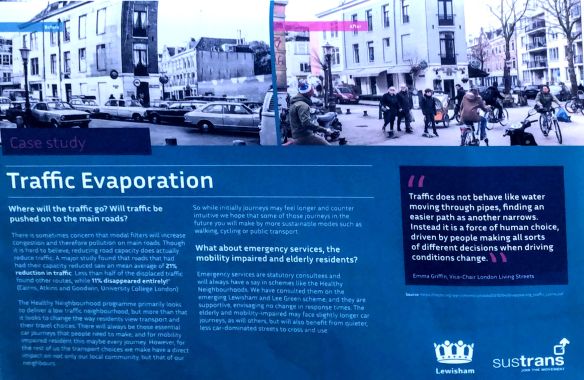 There were a number of maps and panels on display, including one with a headline title of “Traffic Evaporation” – see above. If you read the detail of the panel it claims only 11% of traffic disappeared from such schemes, but most of it found alternative routes. In the case of Lee Green this will mean more traffic on other minor routes, effectively displacing the problem and affecting other residents. But there will be a lot more on major roads such as the A20, A205 and A2212 thus creating long traffic queues and more air pollution not less.

One amusing answer I overheard in response to a question about emergency vehicle access was that police cars should be able to just “barge through” the barriers. That sounds exceedingly unlikely. Also some emergency vehicles may be able to get through the camera-enforced “bus gate” on Manor Park but I don’t understand how they will get through the other road closures. Delays to ambulances, fire engines and other emergency service vehicles are a major risk to life – see our recent blog post here which covers that issue: https://tinyurl.com/whzxksr . It is simply wrong for Lewisham Council to put in a scheme that introduces such delays.

You can “follow” this blog by clicking on the bottom right.

This site uses Akismet to reduce spam. Learn how your comment data is processed.